We put dates in the title of the Stream so we can go back and find it. Now, we’ll never find this one, but it won’t be worthy of archiving. Trust me.

I remember being on the 580 driving through Pleasanton, California, with my mom on August 8th, 1988. I was barely 10.

“Eric, do you know what the significance of today is?”

“The Germans bombed Pearl Harbor, or some s***,” I replied between tugs of Big League Chew.

“Oh, you meant the actual date on the Gregorian Calendar. My mind doesn’t work that simple,” I said while I put the wadded Big League Chew behind my ear and opened a ring pop.

“It’s not really significant but do you know when this will happen again?”

My mind RACED as I sucked on that ring pop.

*moves ring pop to pinky finger, sizes self up in the mirror’s reflection*

“Feels like a trap but probably 11 years, one month and one day from today.”

9-9-99 comes and it’s awesome. Just like 8-8-88 but older. 10-10-10 happens and again, it feels just like the previous calendrical certainties. But it wasn’t. People lost their mind over nothing.

Just like Texas fans after the loss to BYU.

“But it wasn’t a certainty.”

“It was after Ash and the two offensive tackles were declared out.”

It’s 2014 for those Selvinsankles out there.

The loss sucked. I replaced the ring pop for Modelo’s and it still stung, but it wasn’t expected. Going into the game, I was hoping for a 2011-type season. Good defense and erratic, yet imaginative and exciting offense.

Defense went from YAY! to meh in between the band playing and the offense was as creative as a John Grisham plot. Lawyer is on the run for his life AND freedom.

2010 was just like 2011 but with higher expectations and poorer results. Expectations with Strong ebbed and flowed with David Ash’s health this season, but now that Ash is gone for an undetermined amount of time, it’s time to recalibrate. Ian pointed it out plain as day. So did BYU.

The 2010 defense was Muschamp’s farewell. Despite people failing to understand the defensive/offensive interplay and cause and effect, it was actually a good defense. Good, not great.

What I saw on Saturday was a defense that registered anywhere from good to bad. That doesn’t mean it’s a bad defense, it just means 2010 UCLA took the place of 2014 BYU.

The offense is lumbering. My friend and colleague made me laugh audibly in 2010 when he said the Greg Davis offense looked like Turbo and Ozone pop-locking up and down the field. I long for those days. The offense truly is a buzzkill and there’s nothing Charlie Strong can do about it now, other than improve it incrementally.

I’ve been very deferential towards Shawn Watson pretty much since Day 1. I like the guy, think he’s a good dude, etc. However, if he doesn’t show some ‘creativity’ this week, I’ll assume he’s a rigid philosopher. I don’t care that he ran inverted veer in Nebraska. This is Texas. I don’t care that he had a sophisticated passing game with Teddy B. He has Tyrone Swoopes.

Going on his second week now, Watson has known his starting 11 and supporting personnel. He needs to create some dimension to this offense.

If he doesn’t, he’ll look like Greg Davis in 2010 and fans won’t give Charlie Strong the credit for looking like Will Muschamp in that same year. They didn’t then, they won’t now.

Sounds like something the government would throw millions at so, “we can fix the root cause.” Uh, the root cause is losing. Don’t lose. Fat studies will show you shouldn’t be fat. Drinking studies will tell you more scotch is the antidote. This isn’t hard.

It’s not hard. Recruiting is going to suffer. I’m going to pen a recruiting reset in the coming days, position-by-position. It will be good. It will also be bad and filled with predictable conclusions.

GHD has articulated his recruiting opinions well. I was hoping we wouldn’t have to broach what amounts to what is likely his best argument: Selling recruits on a vision. I was hoping Texas would win; all the recruiting caveats apply at that point. Texas sells itself.

Strong is a force in person. Players like him. Parents love him. But there are a lot used car salesmen (some selling Porsche, some selling lemons) out there to compete with. A poor record is a considerable hindrance to distance one from. Studies have shown. 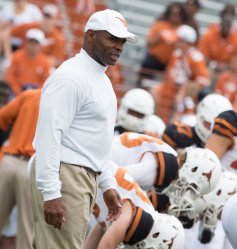 Hill is from Schertz Clemens, up Dos Bobby way. Texas moved on him late in the process. Had Mack Brown offered him in December like I advocated, he would have committed. Strong made a late attempt at Hill, but the OLB stayed true to his commitment to South Bend.

When his name first made its way to me, I laughed at how he was 2-star. I still laugh as I recollect the video. Seriously, I’m laughing like a Viking crunk off mead.

Strong needs to find guys like Hill; players with rare elements, who are buried just under heavier sediments. Players the caliber of Hill don’t grow on trees, but in this fertile state where phootball fotosynthesis is abundant, they do grow.

In my opinion, Strong’s tenure at Texas is tied to discovering, evaluating, and developing kingmakers. He needs these under-the-radar types to buy him some wins – and time – until he reins in Top 10 recruiting classes with regularity.

I was hoping 2014 would be the year he could do that, and not all hope is lost, but if we’re being honest, Strong and Company is going to have to do this the hard way.