There is a lot to the long story that makes up the man Charlie Strong. The head coach of the University of Texas that will trot out on the field with his team on Saturday night is a story worth knowing.

His story is one of sacrifice, southern realities, audacity, hard work, patience, perseverance, and being good at his job.

It is a story of being so good on some levels that the desire to win won over some southern traditions.

Maybe it was part sting, part history, part cynicism and part my naivety but I was asked a little over a decade ago about the possibility of a black head coach of the football program at the University of Texas. My quick answer was, “Texas or Texas A&M will never have a black man as head coach.”

As I sit here on the eve of the 2014 season, you can imagine the shame, not only about the prediction but the assurance, confidence, and borderline arrogance in which I spoke it with.

History will be made. History is important. History should be appreciated.

History will be made on Saturday night just as it was in College Station on September 8, 2012 when Kevin Sumlin ran on the field with Texas A&M to face the University of Florida.

History will be made just as it was on January 20, 2009 when Barack Obama was sworn in as the 44th President of the United States.

At some point it will not be history and the outliers will not matter. I am praying for the day when we run out of first times for an event to take place, a title to be held and a height to be reached.

What does all of that mean to Charlie Strong? He’s a football coach and attempts on all levels to keep his conversations about teaching and developing football and life to the young men in his charge.

Charlie Strong is already fully mollified as a football coach. You do not coach at a place like Texas without it. It is like looking for a needle in a haystack to find someone that he has coached, coached with or coached for to say something negative about him.

Here is the one immutable fact about history – it is strengthened with success.
In 1949 Paul “Tank” Younger became the first player from a historically black college to be in the NFL. He was far and away the best player in all of black college football. He played for the legendary Grambling coach, Eddie Robinson.

Younger said that Robinson told him, “You don’t realize how important it is that you make it. If they bring you up there and you don’t make it, they can always say, ‘We took your best and he wasn’t good enough.’ There’s no telling when another football player from a black college will get another opportunity.”

Whether making history, part of history or holding no historical significance production is everything. 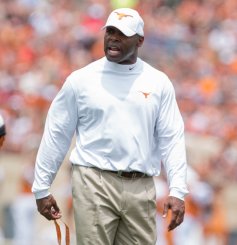 While seemingly a bad fit for a comparison to Charlie Strong the advice of the late Al Davis, former owner of the Oakland Raiders rings true, “When you have great coaches; then after you get great coaches you get great players. You have a great organization and you can tell them one thing – Just win baby!”

Charlie Strong’s currency will be winning.

His job is bigger than winning but when history tells his story it will not be about graduation rates. It will not be about players he removed from the team, community service projects, number of Rhodes Scholars, or his historical impact being the first black head coach at the University of Texas.

As a man that is not comfortable with everything coming down to winning when we are talking about amateur sports on a college campus, I do look forward to a day when winning, production, and success is the criteria through which we are all judged.

I bet Charlie Strong feels similar and it starts on Saturday.