This is the second time in two offseasons I’ve discussed Tim Beck as an option for the Texas OC job. He didn’t get it last time but chances are he’ll find it a better opportunity this time around.

If you didn’t already know, Beck got the call to replace Herman as QB coach when he left Ohio State after the 2014 playoffs for the Houston job. Urban made Beck Co-OC with OL coach Ed Warriner and they proceeded to have difficulty over the next two years matching the output of the 2014 offense, navigating the Cardale Jones vs J.T. Barrett QB battle, or rebuilding the passing game. Before that, Beck was the OC that replaced Shawn Watson at Nebraska (promoted from RB coach) when Bo Pellini decided to wade deeper into the world of spread-option run concepts to make the most of Taylor Martinez. Before that, Beck worked with Mark Mangino at Kansas, and before that he was the head coach at Mansfield Summit in Arlington, TX.

At Kansas and Nebraska Beck was more into the outside zone play but at Ohio State they’re more of a power/inside zone team with outside zone as a complement to mix in and I suspect the same will be true at Texas. Obviously given this extensive background Beck is very well versed in the world of spread offense and spread run game, you’d be hard pressed to find many coaches in this sphere better than Urban Meyer or Mark Mangino.

When people have been trying to diagnose the problem with Ohio State’s offense over the last few years one theory that has been pretty popular in Texas is the notion that their regression at QB stems from losing Herman and having to replace him with Beck. If true, that makes it all the ironic that Beck would get the call from Herman to coach the position at Texas.

Here’s a snapshot of what the offenses that he’s coordinated have looked like over this decade: 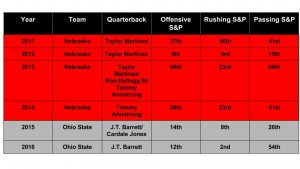 As you can see here, the passing game has not been a particular strength of Beck’s but his teams have sure run the ball effectively. How Beck works with Texas’ QBs in the passing game will be something to watch since Shane Buechele has a higher ceiling there and Sam Ehlinger’s full potential will only be unlocked with a passing game. If this is a big concern for you then take consolation in the fact that developing QBs does not seem to be a weak spot in Herman’s coaching. At any rate, every year that Beck has been working with an established quarterback he’s fielded a good offense.

I’m sure there will be tons of people who are confused as to why Herman preferred Beck over Mississippi State’s QB coach Brian Johnson (now with Houston) or distressed that Herman made another “comfort hire” bringing another Urban Meyer coaching tree guy with recent struggles on the resume (Drew Mehringer).

I think a lot of this is largely overblown. For one, Herman identified Mehringer as a potential star as a GA and he is hardly the only guy who saw a lot of potential in the young coach given that he was just the OC at a B1G school. He also hired Todd Orlando to Houston, which worked out pretty dang well for the Cougars and was a big part of landing Herman the Texas job. I think it’s fair to say that Herman’s eye for coaching talent and fit has been proven to be pretty solid.

Secondly there’s the whole “ALIGNMENT” angle, which is probably already irritating the heck out of Texas fans but is a huge component to building a successful program. Given that Texas wondered in the wilderness for the first two years of the Charlie Strong era because of a lack of alignment on the offensive staff and then possibly collapsed on defense in year three because of a lack of alignment between the offensive and defensive strategies…you’d think the importance of this would be hard to overstate.

Texas should always be able to count on recruiting the most talented team in the Big 12, the key to maximizing rather than squandering that advantage is a staff that is consistent about developing and deploying that talent. The Longhorns don’t need the most clever or innovative staff, although Beck has definitely been around a lot of innovation, they need a staff that works well together to make the most of the windfall that is every Texas recruiting class.

If Herman feels that Tim Beck is the best candidate to implement his (Herman’s) smashmouth spread philosophy and develop Texas talent under his oversight I’m inclined to let it play out with a fair amount of optimism.

The criticisms leveled against Beck specifically aren’t terribly troubling to me either. The best criticism, which I haven’t even heard much, is that Beck isn’t as good at developing the passing game as Herman was at Ohio State. Obviously with Herman in Austin if there is an issue here it’s likely blunted by his oversight.

What you hear more often is that Ohio State squandered their talent with Beck at the helm and wasted Zeke Elliott. The 2015 game against Michigan State is one particular sore spot but the recent shutout against Clemson is probably the darker black eye right now. As it happens, I broke down both games for columns and have some thoughts on what went wrong in those respective games.

The 2015 debacle against Sparty featured criticism that the Buckeyes didn’t feed the ball to Zeke Elliott enough with Zeke himself leading the charge. Imagine that, the RB of the losing team thinks the problem was that he didn’t touch the ball more. It was my estimation that the much greater problem was Sparty playing their patented 9-man box against the run and the Buckeyes failing to make them pay on the perimeter or deep with their passing game.

So a more developed passing attack might have helped Beck there, enter Herman/Mehringer to the rescue.

The recent shutout against Clemson featured very similar problems. Clemson played their safeties very aggressively against the run and again Ohio State couldn’t make them pay with the passing game. Clemson also whipped a young and beat up Buckeye OL with an impressive (and young) DL that gave them fits at the point of attack. That’s simply an issue of talent, experience, and development along the line. At Texas it’s Derek Warhime who’s in charge of that area, at Ohio State it’s Ed Warriner. Incidentally, Texas has a highly talented OL that’s coming into its own right now and virtually never faces DL like Dexter Lawrence or Clelin Ferrell in the Big 12.

So Herman has hired an offensive coordinator with some impressive apprenticeships under brilliant spread coaches, a very strong resume of building spread run games and teaching quarterbacks to execute them, and perhaps a weak spot for building out an accompanying passing game. You have to wonder if part of the issue there has simply been one of focus or talent. It’s hard to teach a quarterback to excel as a runner in an option scheme AND as a passer, particularly if he’s not already solid in both regards coming out of high school.

Even still, Beck did exactly that with Taylor Martinez.

Texas is going to need someone who excels at teaching the spread run game to guys like Buechele, Ehlinger, and future Longhorns, they got that in Tim Beck. They also got a coach with experience and background in the state of Texas. It’s on Herman to make sure that Texas’ passing game talent is properly developed and Beck’s strengths serve to help the offensive staff align the Longhorns towards the end zone.